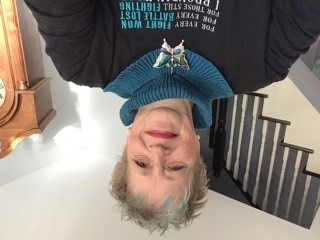 My name is Jan Robertson. I was diagnosed with polycystic kidney disease (PKD) when I was 25, 44 years ago, during a routine checkup. I needed a procedure following the birth of my first child, which led to my eventual diagnosis. During the examination, my doctor noticed my enlarged liver, but was not concerned since I seemed very healthy. He did also inform me that the liver might enlarge during pregnancy in some instances. My doctor then decided to send me for an ultrasound just to be sure. I went to the hospital for the ultrasound and before I got back to his office, the technician had called my doctor to tell him that my liver and kidneys were covered with cysts, and they had no idea what was wrong with me! To say I was in shock is an understatement. I had a newborn at home, my husband had just transferred to Sudbury for work, and I now had an unknown illness. Of course, my mind went to the worst-case scenario. Three months later, my doctor decided he needed to do a laparoscope to determine exactly what was going on. This is when I learned I had PKD. Again, I had no idea what PKD was, and my doctor did not give me much information, largely in part because there was little really known about the disease at the time. I stayed with this doctor for two years, but then was let go as a patient because he was a surgeon, and surgery was not going to fix this.

I then endured many difficult years. I went to several different doctors in three different cities over this time. All they would do is measure my belly and tell me it was getting worse; that there was nothing they could do to help. By now, I had two young children and felt like I had no control over what was happening to my body. I decided though, that I was going to keep fighting and do whatever I could in order to see my children grow up. I think that goal was a lifesaver, and carried me forward until I finally got the help I desperately needed. One day out of the blue, I got a call from a man in Oakville, ON asking if I was Jan Robertson and if I had PKD. He had received my contact information from the PKD Foundation US, and wanted to know if I would be willing to meet in-person. I was ecstatic, as I did not know another soul who had this disease. We met and my life changed forever in that moment. During this first meeting, we agreed to form the PKD Research Society of Canada, which would become the PKD Foundation of Canada in time, and I learned of Dr. Janet Roscoe, a PKD specialist based out of Scarborough, ON. I truly believe Dr. Roscoe was the first person to help save my life! 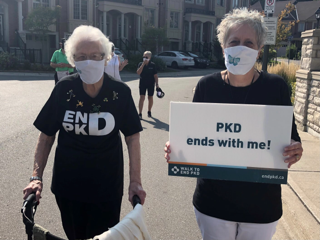 I went to Dr. Roscoe on August 30th1995, and we spent two glorious hours together going over everything related to my disease. It was the first time since my diagnosis that I felt there was any hope for my family and I. On my second visit, she referred me to Dr. Gary Levy at Toronto General Hospital for a liver transplant. She could not believe that my previous doctors had let me get to the stage I was at when she first met me.  I would see Dr. Levy that fall. He immediately ordered three days of pre-transplant testing and by November, I was on the transplant list.  My wait time was supposed to be approximately one year, but it turned out to be two and a half years until I received my first miracle transplant on April 25th, 1998.

It turned out to be a very good thing I went on the list when I did, as Dr. Levy said I did not have much time the way things were progressing. Everything went very well with my liver transplant for almost ten years, but then overnight things took a turn for the worse. There was a complication with the donor bile duct (which connects the donor organ to the host body), and over the next four months, I once again found myself in liver failure. This time with mere days to live. At first, they thought a surgery at St Mike’s could repair the bile duct. After the specialist tried, he came to me with tears in his eyes and told me my only hope was another liver transplant. I had wanted to have a living donor this time, but because my first transplant came from a deceased donor, I was required to have a deceased donor again.  I also needed a new bile duct, and that could not happen via a living donor. Fourteen years post-second liver transplant, here I am! My ‘new to me’ liver is still very happy. 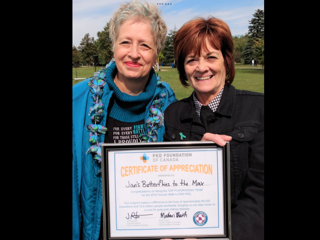 My transplant journey is still not over. As they say, “The third time’s a charm!” I will soon need to start looking for a kidney donor, as my kidney function is in the low 20’s and on the decline. This is in part due to PKD, but also because of damage incurred from being on anti-rejection drugs for 25 years. I am quite happy that this time I have the chance to find a living donor for this transplant. I hope that I will be able to find my angel donor easily and not get as sick as I was the last time. There may be a problem with antibodies though, as I have had two children, two different liver donors, and countless blood transfusions during my second transplant. My medical team will address this at the time of assessment for my kidney transplant.

I never expected to be as sick as I have been for as long as I have, but my life has still been very blessed! I have found an incredible PKD and transplant family that I love very much. These fellow patients are the strongest, most courageous, loving and supportive group of people you could ever meet. It is an honor to share my life and journey with them. We all share a very special bond as PKD patients and transplant recipients. We immediately become friends whenever our paths cross, whether online or in-person. I have seen so many miracles over the last 25 years. Each one makes me smile and helps heal my heart.  I meet angels every day, who have saved and changed lives forever. I truly believe this has all happened for a reason, and I am very proud of all that our communities have accomplished. To all my fellow PKD Warriors, I say to you - Keep fighting and NEVER GIVE UP! 💚