My name is Lisa Werner. My twin sister and I were born with polycystic kidney and liver disease (PKD1), a genetic disorder, but I wasn’t diagnosed until the age of 29. I received a kidney and liver transplant on November 16, 2020. The liver team removed my 35 pound liver, which was one of the largest livers they had ever seen. I am grateful to have a second chance at life, unlike my father and sister who both passed away from this disease at the age of 51. Heidi Werner passed away on July 3, 2020 from acute kidney failure, and my father, Edmund Werner, died of an aneurysm February 9, 1993. Even though my sister was taking the drug Jinarc to slow down cyst growth, she was part of the small minority that suffered from liver damage and cognitive disorder.

Living with polycystic kidney and liver disease was challenging, particularly when my liver was progressively getting bigger every year. I looked pregnant for 12 years. In order for me to hide my stomach, I would buy balloon tops which worked for a while. Then it was getting more difficult to find clothes that fit me.  I usually had to buy oversized clothing. I tried maternity wear, but it didn’t really work because the waist section would always slide down. I was constantly pulling up my pants. The only thing that worked was leggings with a high waist. 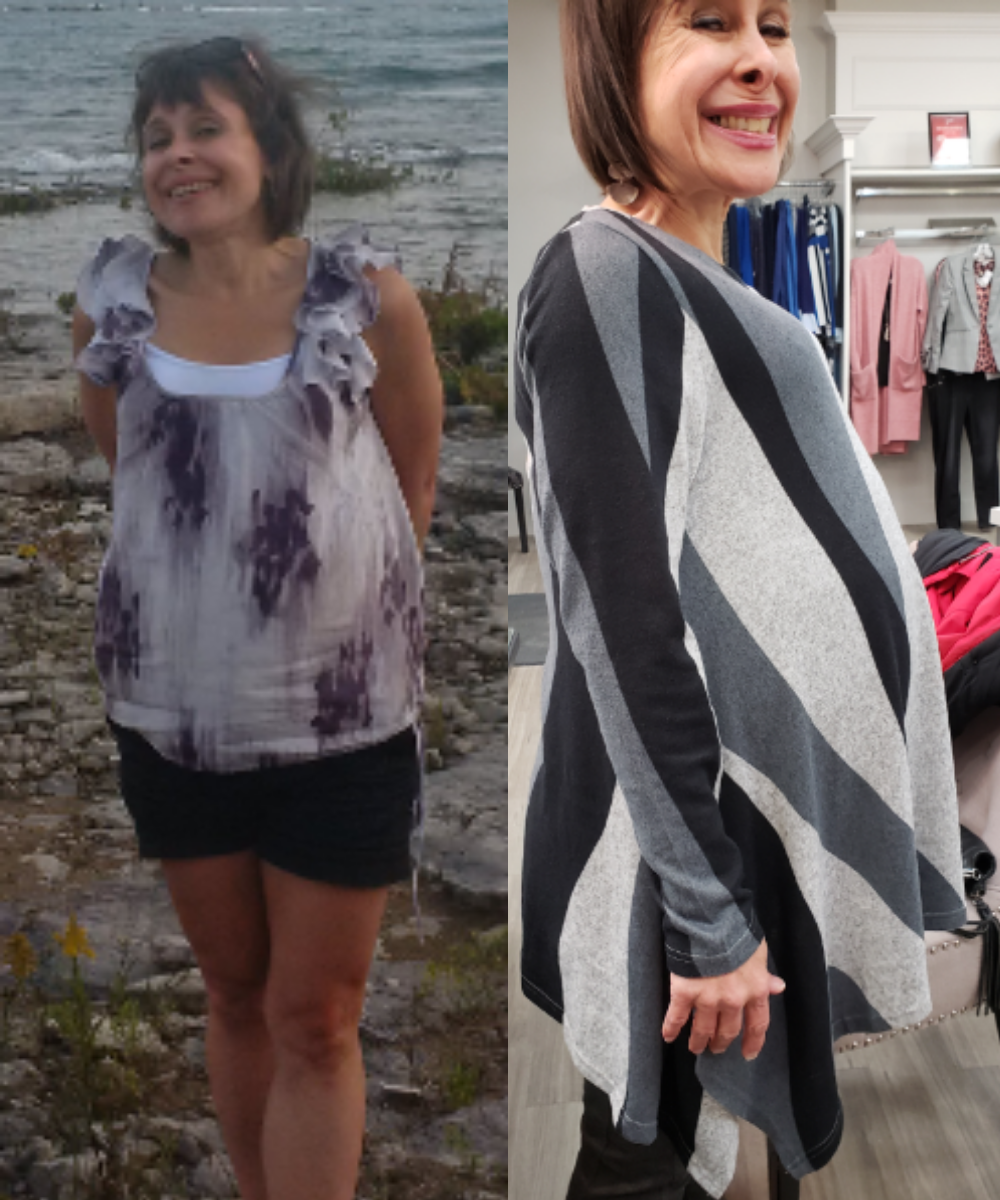 My first liver transplant assessment was on February 16th and 17th of 2011, my second one was on December 14th and 15th of 2016, and my third liver and kidney transplant assessment was on October 30th and 31st of 2019. After my third liver and kidney assessment, I was finally placed on the transplant waiting list in April 2020, because my liver was expanding more and more. My sister was so happy for me because she knew the challenges I had endured, but unfortunately she was never to see my transformation. On Sunday, November 15, 2020, I received a call from Lori Sashegyi, Transplant Coordinator at University Hospital in London, Ontario. A donor was found. I raced to the hospital and was given some information about the donor. I had to get tested for COVID, bloodwork drawn, and I was weighed before surgery.  I weighed 152 pounds. 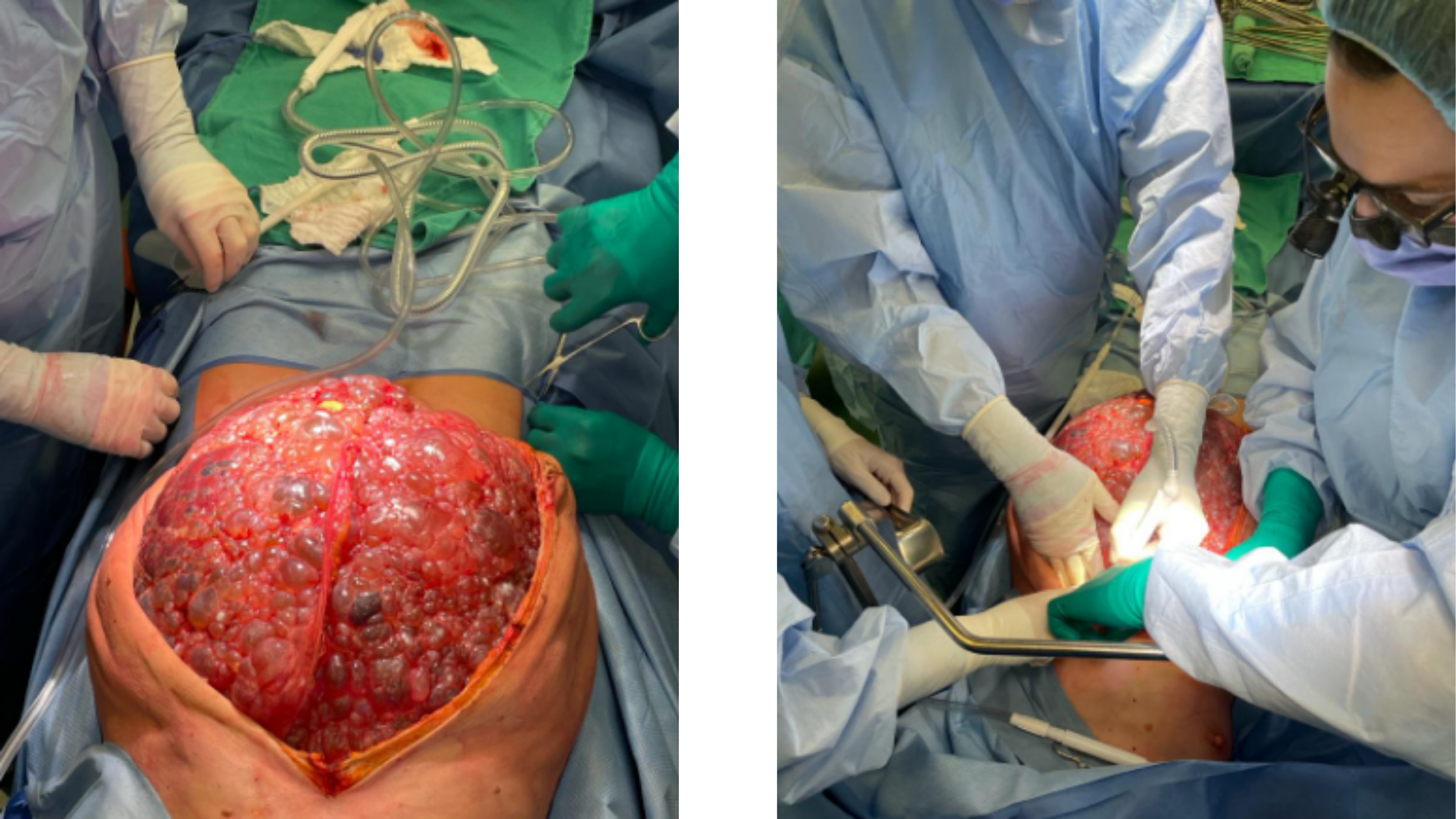 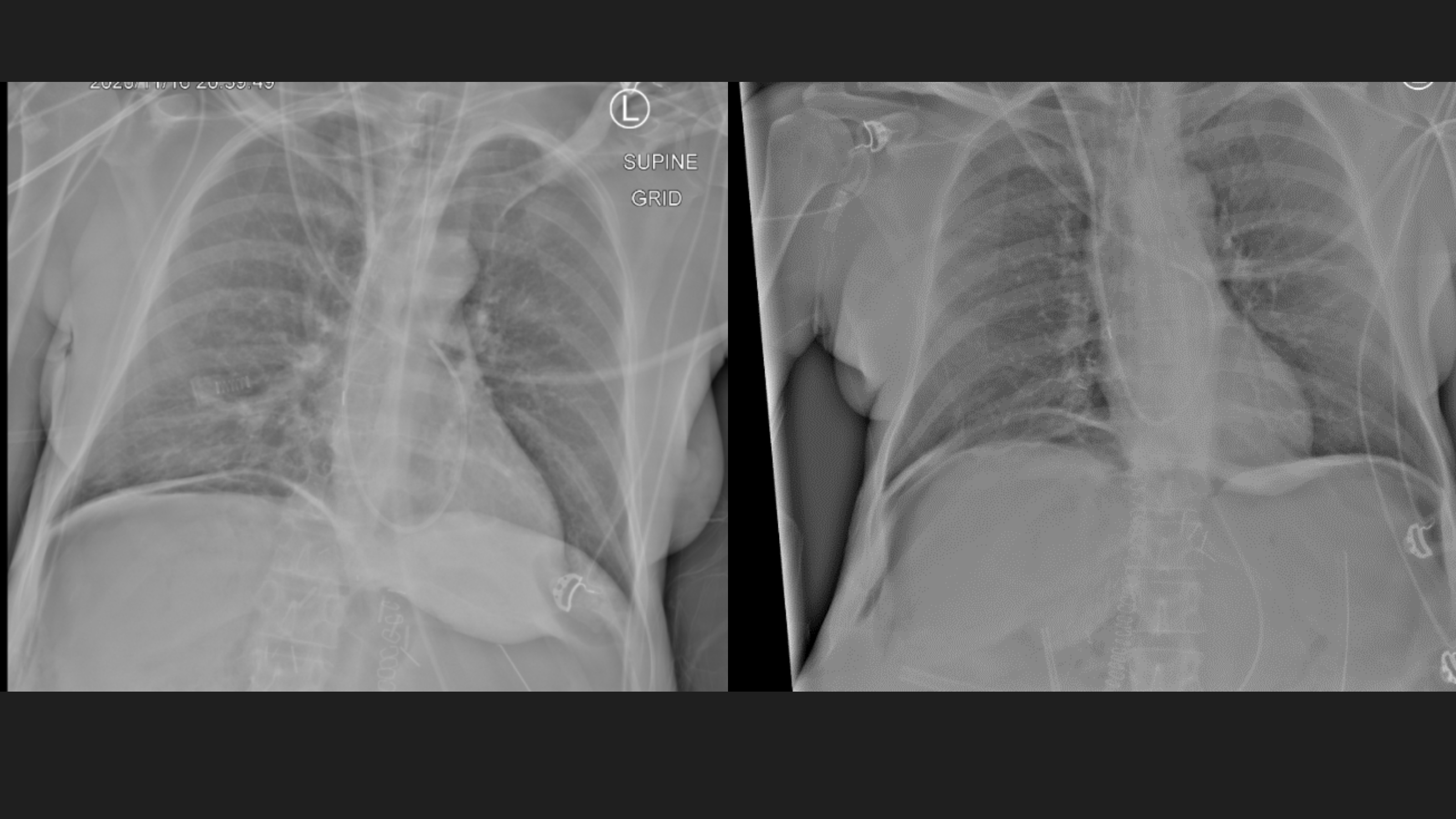 X-rays of the enlarged liver

After the surgery, I was in the ICU until the next day. I woke up on Tuesday at 9:30 am and returned to the Transplant Unit in the afternoon. Then I was made to stand up and walk a short distance, so I wouldn’t get any blood clots. During my 10-day recovery at the Transplant Unit, I was closely monitored by nurses and doctors, underwent many tests, and walked every day. I also had physio to regain my strength.  On day 2, I was taking my anti-rejection drugs.  On day 5, I had a liver ultrasound and slept on a stretcher that night because I couldn’t sleep on the hospital bed. I took melatonin to help me sleep.  It didn’t work. On day 6, I had my first shower and felt refreshed. I did my 15 loops of walking around the Transplant Unit. I was hooked up with saline and pumped with magnesium and potassium solution for 20 hours to keep my kidney happy, as my creatinine levels were rising; but I was going to the bathroom every 2 hours and burping frequently with gas. On day 8, I went to Nuclear Medicine to do a Renogram to make sure the kidney was functioning properly. On day 9, I had a chest X-ray and was injected with cultures because of my low white blood cell count. I was discharged at 5:30 pm. On Friday, November 27th, 2 days after my discharge, I went to the hospital for bloodwork and COVID testing.  I met with the nurse at the Transplant Clinic who performed my bladder scan, and she discovered that I wasn’t releasing very much urine, so I went to get an ultrasound which detected a collection of fluid. I was supposed to get a drainage insertion, but I was sent home.

The picture to the left is me after being discharged 2 days later from the hospital, weighing 110 pounds.

Around 10 pm that night, I was experiencing back pain and went to the Emergency department. I was admitted at 2:07 am. One of the kidney doctors came by and wanted to know where my pain was coming from. I had an ultrasound and was taken to the 8th floor. I felt nauseous and vomited because of the medication I was given to relieve the pain. One of the liver doctors came to see me about getting a drainage insertion. I should have had that insertion completed after the ultrasound I had on my Friday follow-up visit. I had the insertion completed at 1 pm and was on bed rest for 3 hours. I had no food for the day, just I.V. drip and water. I was transferred to a semi-private room around 4:30 pm. At 11:30 pm I had some chicken broth and 2 Jell-O cups. On Monday I was shown the picture of my enlarged liver and the image of my fluid collection. I was discharged at 11 am.

This is me with my drain and incision stapled together. It was not comfortable with the staples as I could not stretch my abdomen that easily. The drainage insertion was surgically inserted because I had fluid collection that caused me so much pain until I had it removed on December 22nd. 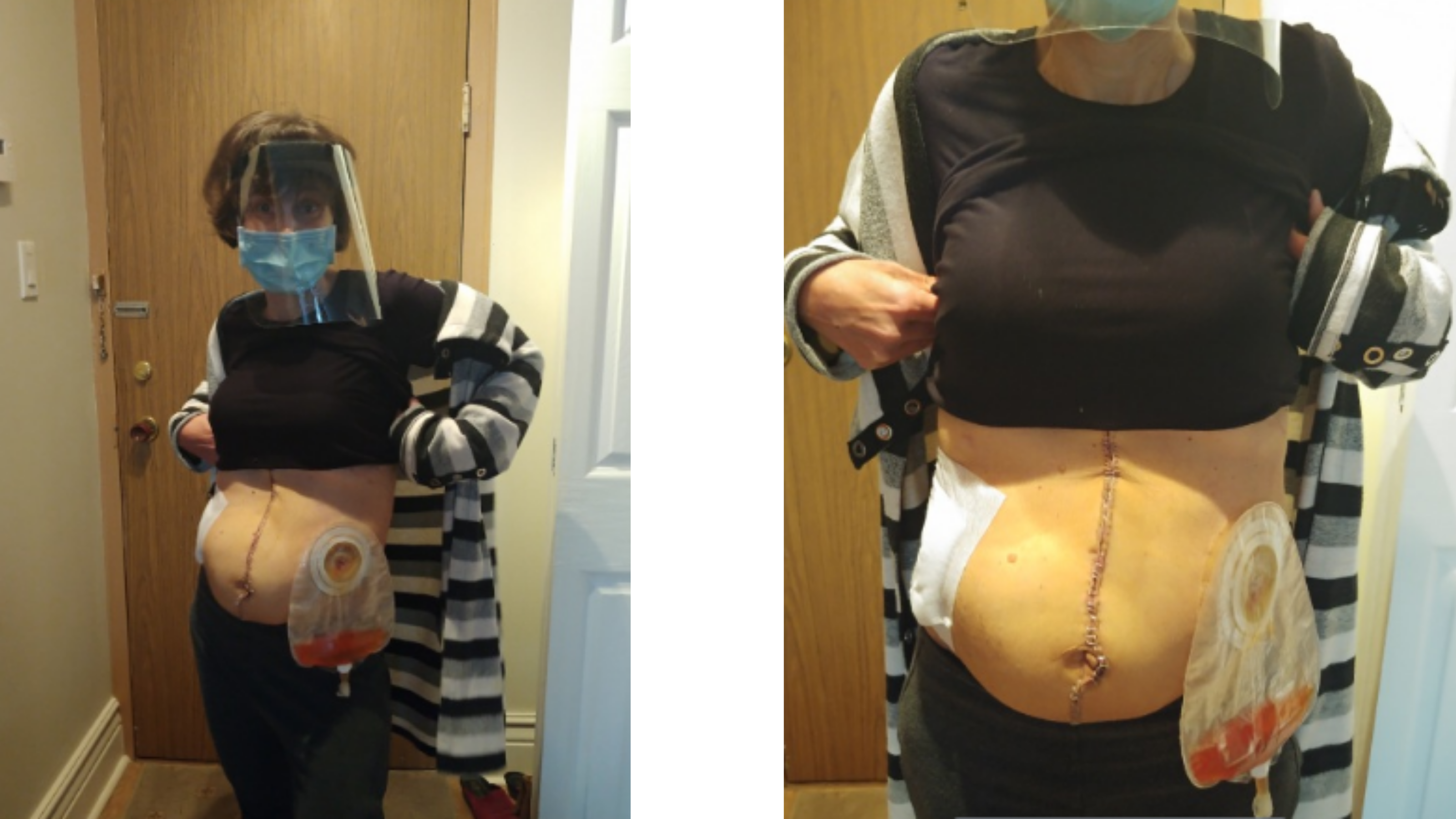 Even though I received my second chance at life with a double organ donation, I am still being followed closely with both kidney and liver doctors. Because of the anti-rejection drugs I am on, my white blood cell counts were not stabilizing, and I had been taken off one of the anti-rejection drugs (Cellcept) and the antibotic drug (Septra) twice now. The first time was on February 21st and then back on Cellcept on April 16th and Septra on April 30th. The second time was on June 28th for Cellcept and June 29th for Septra.  On July 29th I was back on Cellcept but at a reduced dosage, 500 mg taken twice daily instead of 1000 mg, and stopped taking Septra. I was required to return to taking blood pressure medication. I also had to take folic acid until August 28th. On October 25th I was introduced to another antibiotic drug (Mar-Dapsone) to replace Septra and to increase 250 mg of Cellcept. I now take 750 mg of Cellcept.

Providing weekly bloodwork done at the hospital was crucial for testing for cytomegalovirus or CMV, creatinine levels, and liver enzymes. In February, I tested positive for CMV, had a urinary tract infection, and unstable creatinine levels.  I started antibiotics, both orally and intravenously. A PICC line was inserted on February 26th, and I administered the one antibiotic intravenously twice daily for 14 days.  My body was starting to reject my kidney. On March 23rd, I had a kidney biopsy procedure completed and I had to administer myself a shot of neupogen, which was to help increase the production of white blood cells, for the next 6 days. On Wednesday, the second day of the neupogen shot, I experienced extreme back pain. Neupogen does have side effects and one of them is aching bones. I went to Emergency at 11 pm that night and wasn’t admitted until 2 am. The back pain was not going away, so the nurse administered morphine which helped for 10 minutes. I was pacing back and forth. I was moved to another bed in the Emergency department, but I was not able to sit or lie down. I had to keep walking around the room. I did manage to lie down as soon as the pain was bearable. Around 9 in the morning, I had an X-ray done, which indicated that I had a fractured tailbone. One of the kidney doctors increased my dosage to 60 mg of prednisone for the next 3 days, to be reduced 10 mg daily until 20 mg dosage level was reached. I was discharged at 11:30 am on Thursday. I wasn’t looking forward to giving myself a shot of the neupogen at 8:30 pm because I knew I would be in pain again. The pain would start around midnight to 3. I had to “grin and bear it” for the next 4 nights. With my fractured tailbone, I started taking vitamin D and calcium, and I saw an orthopedic doctor on April 16th. A week later, I had a bone density scan done and that indicated I had a low bone density. I also had follow-up appointments with an infectious disease doctor in March to ensure that I had negative CMV results for the next 3-month period. My levels for my creatinine and white blood cell count are now stabilized.  I do bloodwork at the hospital every 2 weeks. As I’ve been told, it takes a year to get things all figured out. I also received a letter from the donor family because the daughter wanted to know how I was doing. I wrote back on August 20th to let them know that I was grateful for this gift from her mother, under sad circumstances, and getting my body back to normal. Finally I don’t get asked when I am due anymore. Once I got the clearance from my Transplant Team to return to work, I started supply teaching in October. I am an occasional elementary teacher for the Thames Valley District School Board. I have the flexibility to work. Now, I have monthly bloodwork for the Kidney Transplant Clinic and every 3 months phone visit with the Liver Transplant Clinic.

During my speedy recovery, I was renovating my mother’s condo and dealing with my sister’s estate. Being a project manager and an executor were good distractions. Her renovation started last September by knocking down walls to create flow and space. It was completed last April. My mother’s condo is gorgeous. She has a beautiful galley kitchen, luxury vinyl flooring, and a larger bathroom. During my spare time, I keep in shape by running and going to the gym. I was still running even though I looked pregnant with the extended liver, and the comments that were made when I ran by people were annoying.  I also love to cook, bake, design, decorate, and renovate. On July 24th, I had a DIY Fundraiser by having a neighbourhood garage sale and charity bake sale. I donated $400 to the PKD Foundation of Canada. 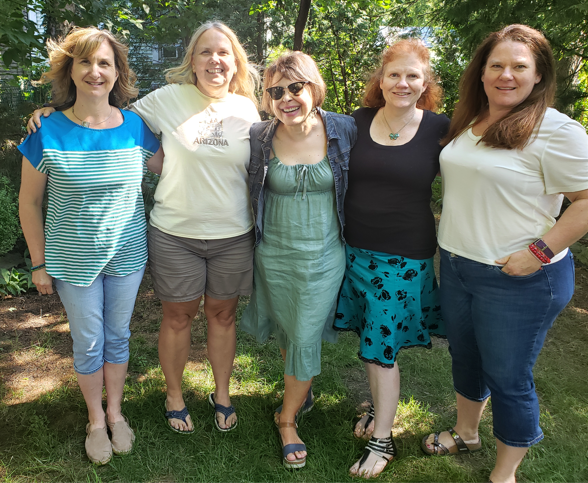 This is me (middle) celebrating my 53rd birthday with my elementary and high school friends on August 14th.

That’s my story, and I hope that more people can receive a second chance at life like I did.  I encourage everyone to sign their donor card as organs are desperately needed.