"When I was around the age of 35 (1996) I was diagnosed with polycystic kidney disease.   PKD is an inherited disorder where clusters of cysts to develop within your kidneys, causing your kidneys to enlarge and lose function over time. Being that I was diagnosed while I was still in the early stages, it didn’t really affect my day-to-day living. It wasn’t until about 7-10 years later that I started to develop high blood pressure that needed medication to control.

As years went on, we were still able to travel and enjoy our outings with our three children, and then later as two of our children got married, the grandkids. As my kidney function started to decline more and more, fatigue started to set in. My grandkids were quite young at the time and really didn’t understand why their grandpa couldn’t play outdoor games with them anymore, like he used to be able to. I can remember my grandson (around 3 years old at the time) always telling me that I had to stand to play hockey with him. I had a office chair with wheels on it in the garage that I would sit in.

In August 2015, it was decided to put a fistula in my arm, for hemo-dialysis,  knowing that I would need dialysis before I could have a kidney transplant.

In July of 2016, I had an appointment with Dr. Ingram, my nephrologist at the time.  When he asked me if I was still working, I said yes. He told me that I needed to be put on dialysis. By this time my GFR was at 8%. The next day, I was hooked up to a dialysis machine. By this stage of the disease, I was pretty worn out, so I decided to retire from my job.( I was a boom truck operator, so it involved physical work). Boy, the emotions ran high. Here I was at 55 years old, and I had to quit my job. I didn’t know what to think. Never before did I allow PKD to stop me from doing anything, though it may have slowed me down. But I still remained positive, which was a big part of this PKD journey and still is today. 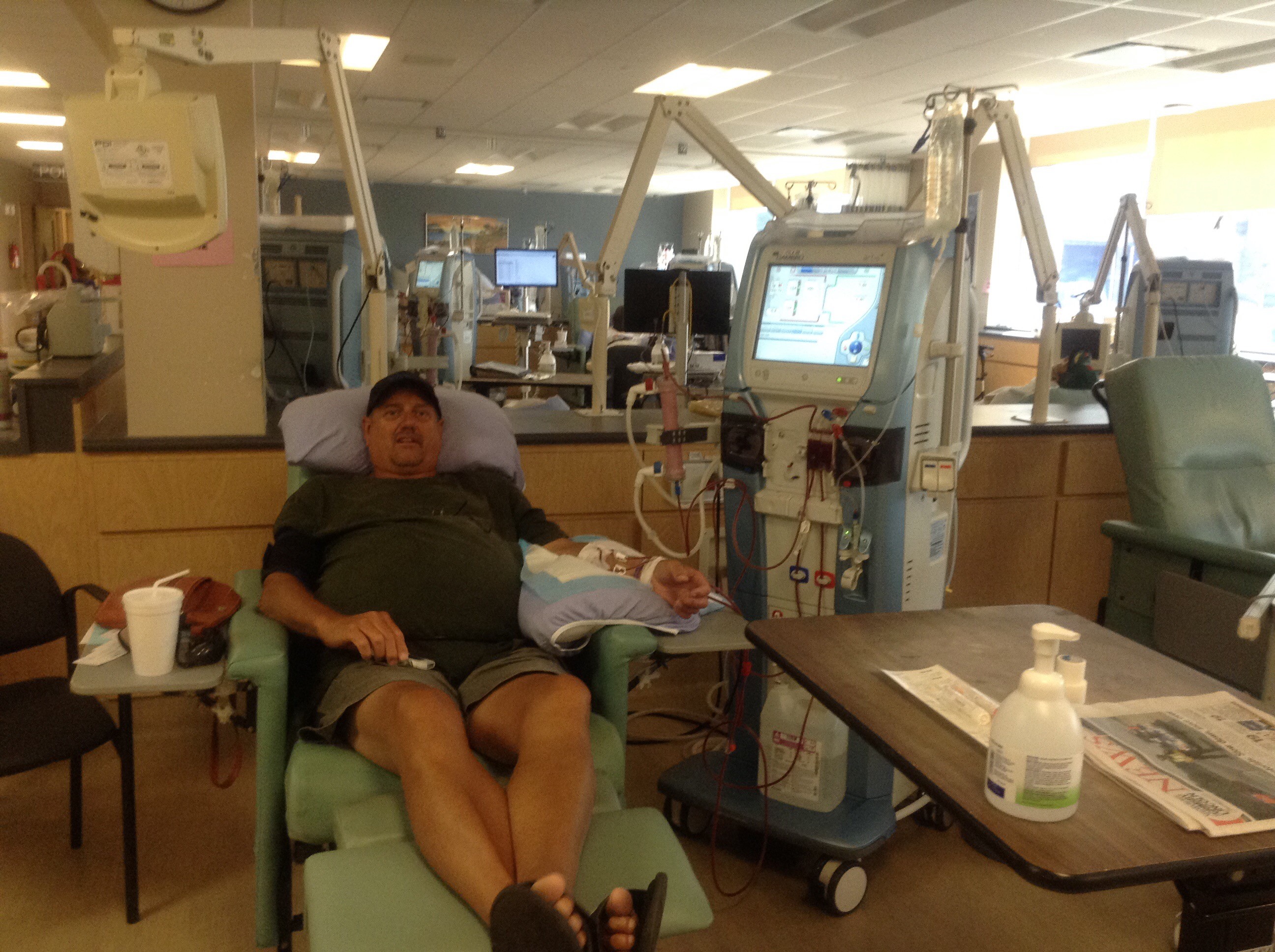 I remember the first time I walked into the dialysis clinic. It was just like being the new kid in the class except no teachers but nurses there to greet you. Not knowing what to expect, all did go pretty smooth. I was going to do home dialysis but changed my mind.

After a month on dialysis, and now being well enough for surgery, I had a nephrectomy to remove my right kidney to make room for my new kidney. By this time, my kidneys had grown to be quite large, both being around 34 cm in diameter each, with a combined weight of about 18kgs (39.7lbs). What a relieve it was to get this done! I was at a point where it was getting hard to breathe.

I was anticipating a transplant so I had a list of about six potential donors, my brother John being the first to start the testing. Soon after the testing began, I was told it was not going to work. The next donor to be tested was my wife, Nettie. As her testing went on, things looked good. Then we got the word that she was a perfect match for me. I will let Nettie share her story about being the donor.

Then came transplant day! Everything went as expected. I had my new kidney and it started working right away. That evening I was feeling pretty good, but tired. The next morning I walked down the hall to where my wife’s room was, but she was not doing as well as I was. There was no romantic walk down the halls yet. That came the next day! A couple of days later, Nettie went home and I stayed until the following day.

So here we are three years later and all is going relatively well. However I did end up with some side effects from the drugs; type 2 diabetes and osteoporosis.  But they really haven’t affected me in anyway.

Just a little on my family and the impact of PKD. 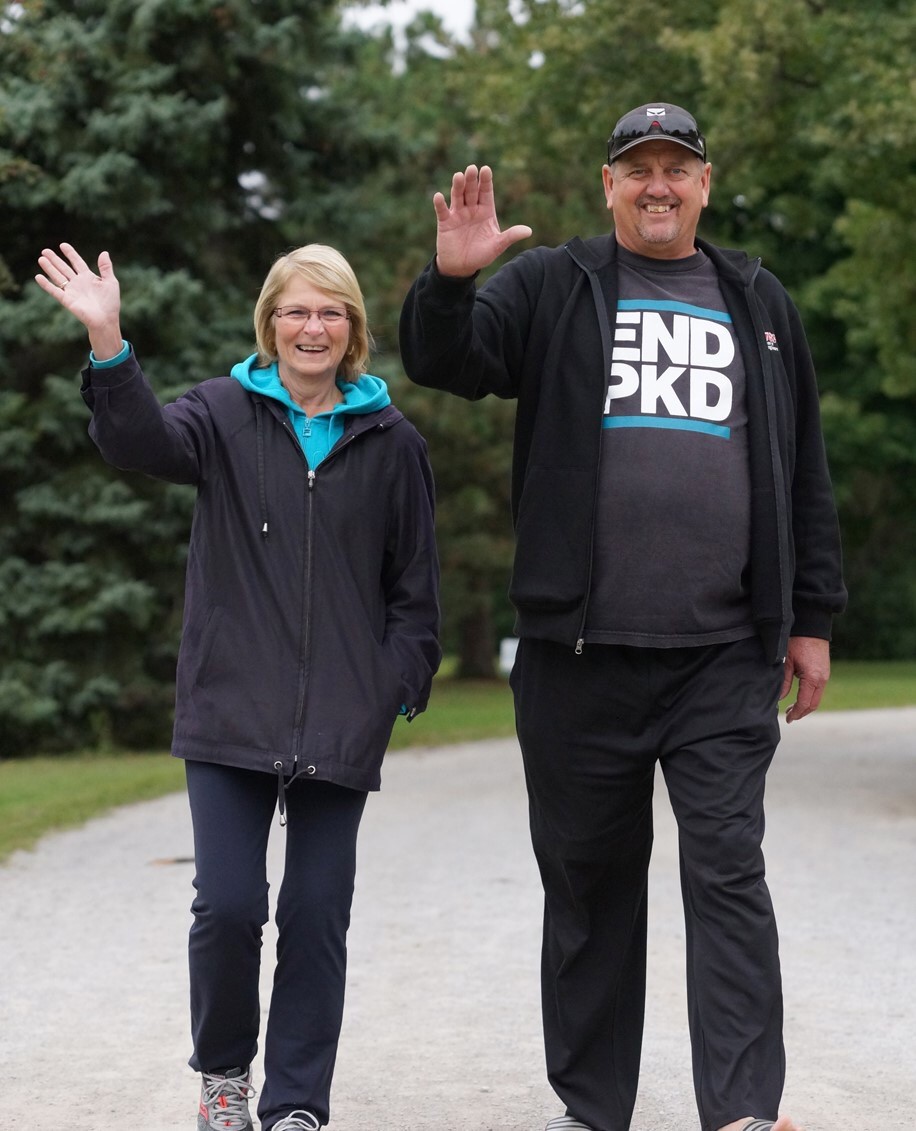 We found out just over a year ago that our daughter in Australia is now living with PKD. She has 5 children, but so far her children are showing no signs of PKD. Our other two children so far have not shown any signs of having this disease. I have five siblings, three brothers that do not have PKD and two sisters. My two sisters live with PKD; with my youngest sister having complications due to PKD. My oldest sister is on dialysis right now and is hoping to have a transplant in June-July of this year. My brother John will be donating through the paired exchange program.

Now Nettie and I, with our experiences as donor and recipient, like to share our positive stories and promote kidney transplantation at St. Joseph’s Healthcare Hamilton, through the Transplant Ambassadors Program and by supporting the PKD Foundation of Canada and the PKD community."

"When my husband, Willie, needed a kidney transplant, never did it occur to me that I would be his donor! He always said one of his brothers would donate. Just out of curiosity, I spoke to my doctor about my blood type. I did not know he wouldn’t have it on file, so he told me to donate blood and then I would find out. So, that’s what I did. Well, that told me I was the same blood type as Willie. But I didn’t plan on being his potential donor, or so I thought! 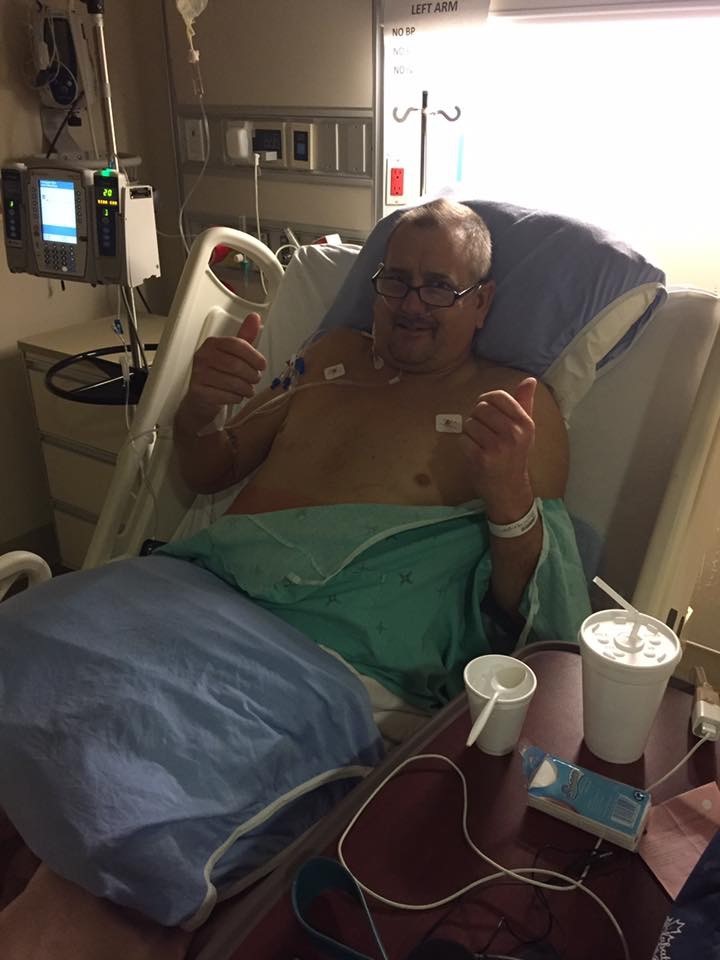 As I went with Willie to all his doctors appointments, because four ears  are always better than two, and there was always a ton of information at these appointments, we’re sitting in his office when the doctor told us his brother’s kidney wasn’t a good idea. His first test already determined his blood type was different from Willie’s, so he didn’t want to go that route. That was already one person crossed off for potential matching. Then, Willie right away perks up and says. “Well, Nettie just got tested, and she’s a blood match!“  Without another second to even consider donating, his nephrologist asked me if I was willing to donate! No thought needed though because with Willie on dialysis for eight months already, and knowing he not only had no quality of life,  but as a couple I didn’t either, so the decision was easy!

And so my testing began.  Test after test, we were one step closer.I was Willie’s perfect match!The thoughts that went through our heads at this time! How could I, not even a blood relative be his perfect match! Deep down, I always knew we were meant for each other! So the excitement climaxed and we were getting things arranged to have help while we were both healing from her surgeries.  Our eldest daughter was coming from Australia with our eldest grandson, But as they were on their two day flight here, we had one more doctor’s appointment, where we were going to have one more crossmatch blood test done to see if our blood was still compatible with each other. Then came the devastating news… Willie had antibodies that came up and was attacking my white blood cells! So, no longer could I donate to Willie. That was such difficult news to get right then! You can imagine the emotions that were running through our minds. Then my nephrologist took me into another room, and told me I could still donate not to, but for Willie.  At this time, we didn’t know much about the paired exchange. But was told I could still donate, and they would find a kidney much for Willie. So after working around the clock searching, his coordinator found one two days later. It took a little while to search for a recipient for mine, but once we had one, a date was set again. So while our daughter and grandson were here, they had a wonderful holiday with us, and learned a lot about the disease and dialysis. And three months later, we went in for transplants. That day, through a chain reaction of four transplants, four people received new kidneys. That was quite an eventful day you could say! 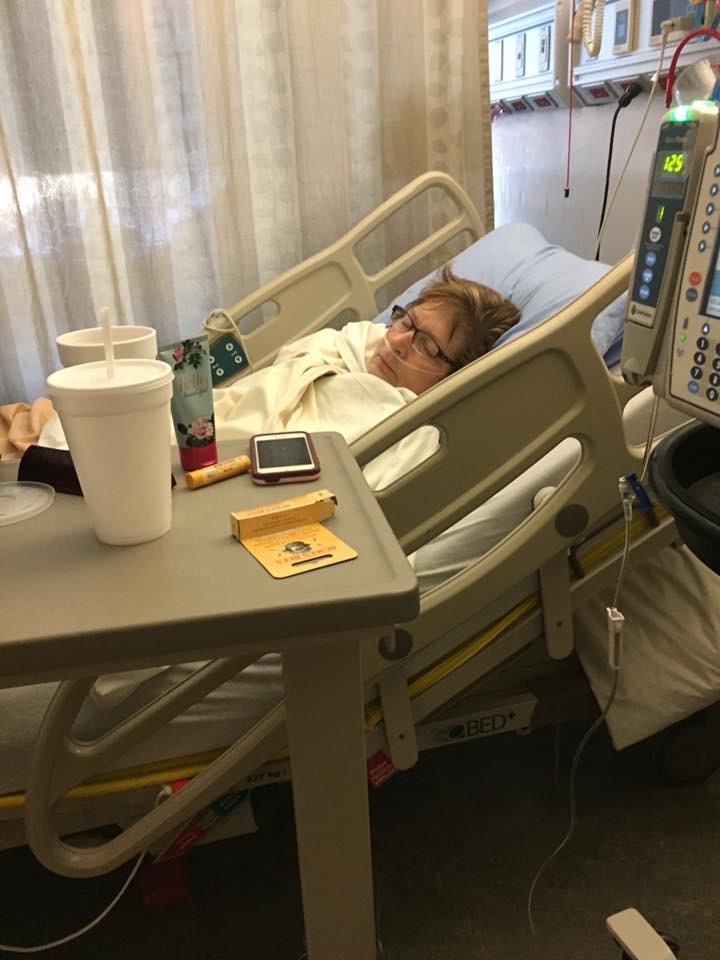 Healing time for me went really well after the first few days, And as of now,  everything is good. Nothing changed for me, other than I have one less kidney. I am on no drugs and can do anything I could before. I could’ve gone back to work one month later, but chose to take an extra month off for Willie. The only difference is how I feel toward donating.  I feel really good about giving someone else a second chance at life for such a little cost to pay for it!

For both Willie and I, it has truly been a blessing! We have our quality-of-life back.  Since our transplants, we have been able to travel again, once to Australia to visit her daughter and her family again, as well as two Caribbean vacations. We also enjoy camping in our RV again, something that was put on hold for a few summers. When asked how we got through this whirlwind of feelings we had, and how we stayed so calm through all this, We can only say it was through the grace of God, and our church family that has been such a tremendous help for us and we know that whatever happens in the future, we will always have this comfort!  Thank you."